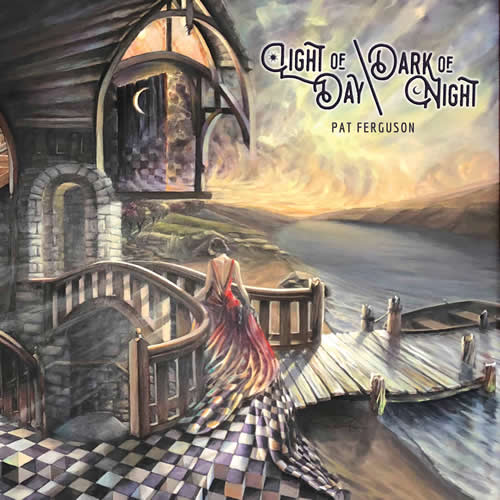 Light of Day / Dark of Night is Pat’s first full-length solo effort, and is out 4/27/18 on LoHi Records. Produced by Adam Greuel of Horseshoes & Hand Grenades, Light of Day / Dark of Night is a record that paints the picture of retrospect and builds an appreciation for what it means to ride the highest of highs or lowest of lows, while longing with admiration for the other. The album showcases a collection of original music that combines gorgeous instrumentation, stirring harmonies, and powerful songwriting rooted in his core influences.

“When you’re in your darkest time, you long for the light. That’s a given,” says Ferguson. “But at your peak, to have the ability to recognize your weaknesses and appreciate that everything can change in a split second…that’s something I’ve always wrestled with. It took toward the end of this recording process for me to realize that this story really was not about the division between joy and pain. It’s about a collective experience that has made me who I am today.”

Featuring guest contributions from the likes of Jacob Jolliff (Yonder Mountain String Band), Kyle Keegan (Ben Howard & Mandolin Orange), Kenny Leiser (WheelHouse), Chad Staehly (Hard Working Americans & Great American Taxi), Sarah Vos (Dead Horses), and Horseshoes & Hand Grenades, Light of Day / Dark of Night is a pure representation of the power of musical collaboration, chronicling a journey that will speak to music lovers of all genres and generations. Pat will be on tour the Spring, Summer, and Fall of 2018 performing solo and also with his band, The Sundown Sound, in support of the record.

When off the road, Pat hosts two residencies in Madison, WI. He is the house musician at HotelRED and performs every Wednesday evening, and also hosts a “Pat Ferguson & Friends” residency the last Tuesday of the month at the UpNorth Madison which features some of the region’s finest musicians. In fifteen years of touring, Pat has shared the stage and performed with Grammy Award winners, Country Music and Rock n’ Roll Hall of Fame members, and countless other world-class musicians including Merle Haggard, Little Feat, Dr. John, Jason Isbell, Todd Snider, Great American Taxi, The Big Wu, Horseshoes & Hand Grenades, Dead Horses, The People Brothers Band, Bill Miller, Trampled by Turtles, Chicago Farmer, and many more.